Services running on the access gateway communicate with the orc8r and generate control traffic. We do not have visibility into the amount, patterns, and service-level breakdown of this traffic. As we try to minimize control plane bandwidth consumption for our deployment partners, especially those with satellite backhaul, visibility into bandwidth consumption is crucial. This proposal details a design for collecting and exporting control plane network metrics from the access gateway to the orchestrator and NMS.

See Life of a Magma Metric for context on existing Magma metrics pipeline. 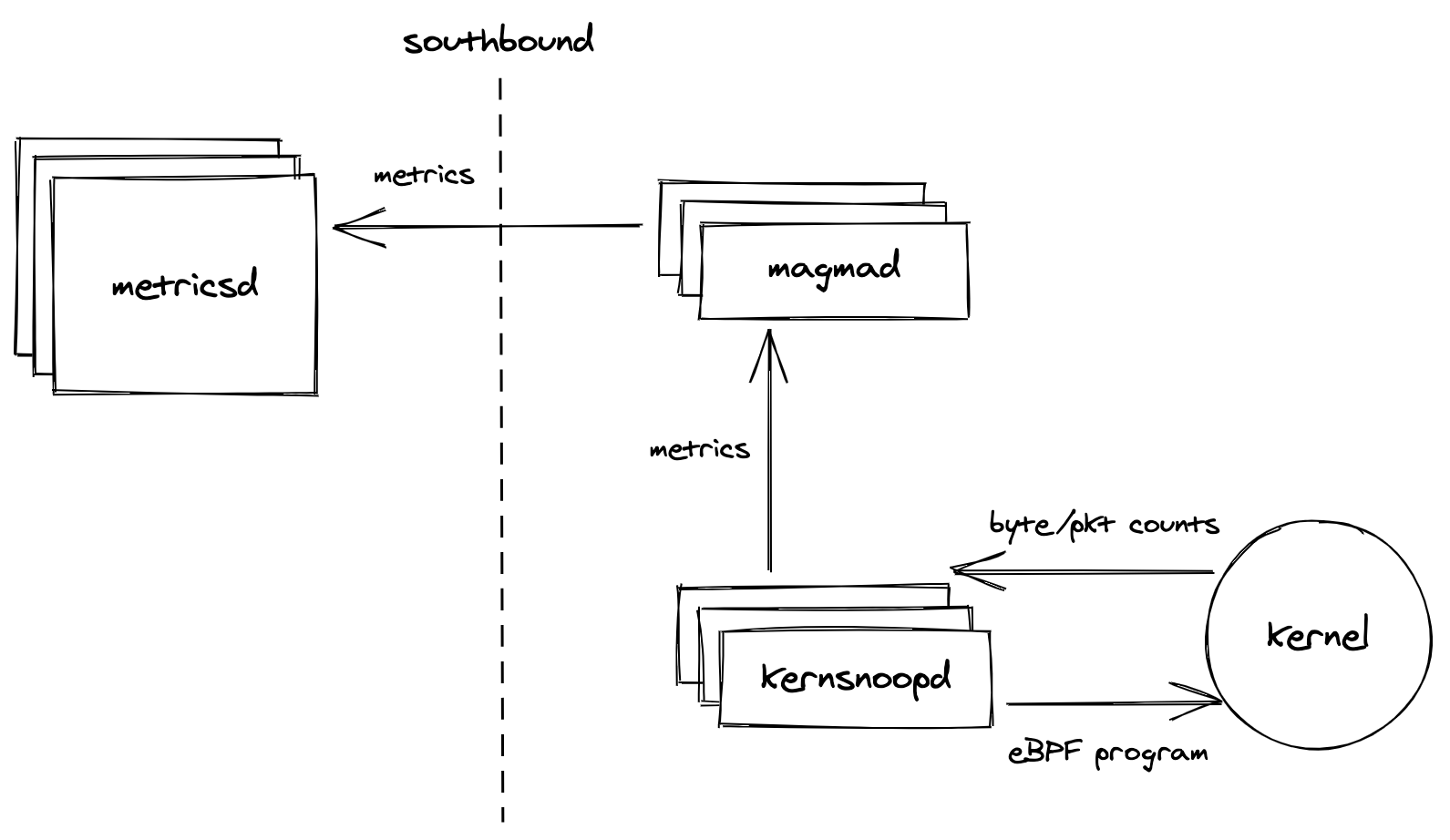 We will use the BCC toolkit for writing and loading our eBPF monitoring program. BCC makes it easier to write eBPF programs by providing clean abstractions for kernel instrumentation, and Python and Lua libraries for writing user space front-end programs that communicate with the kernel space eBPF program. We will write a Python front-end since many of our existing services already use Python, and we have convenient infrastructure for exporting Prometheus metrics from Python services.

The byte counts read from eBPF will be stored into Prometheus counters magma_bytes_sent_total and linux_bytes_sent_total. The magma_bytes_sent_total counter will have the label service_name indicating AGW source service, and dest_service indicating the cloud destination service. The linux_bytes_sent_total counter will only have a binary_name label. On the loopback interface, only the port on which control_proxy is listening for traffic will be observed. This port and other information related to Magma services can be read from the ServiceRegistry. On other interfaces (see Open Issues), all traffic will be observed. task->comm from the kernel will be used to identify the binary triggering traffic. In case of Python services, the binary name is python3 so command line arguments (e.g. magma.main.subscriberdb) will be used to infer the source service name. All traffic from the AGW to the Orc8r will be going to the same destination port, so we may have to look at the HTTP authority header to infer destination service.

Once Prometheus counter values have been set, they will follow the existing Magma metrics path: the magmad service will read the counters from kernsnoopd and upload them to metricsd at the orchestrator every sync_interval seconds. The NMS UI will then display these metrics. The Life of a Magma Metric document describes this path in detail.

This design achieves goals #1 and #2. The choice of eBPF minimizes performance penalty (discussed here) by putting compiled code into the kernel and avoiding raw packet captures. We also utilize the existing metrics plumbing for Python services.

Now we show a prototype of the eBPF program kernsnoopd will use:

This program is written in restricted C (prevents direct memory access, for example) that is suitable for LLVM compilation into BPF bytecode. It uses macros from BCC to create a hash map data structure (dest_counters), and attach a kprobe to the tcp_sendmsg function. This probe gets triggered just before a TCP segment transmission. Our callback function reads the appropriate context and increments relevant counters in the hash map.

Below is an example of a front-end Python program that retrieves and displays the counters aggregated in the kernel:

If/when we move to a Python-free AGW, the design above can be modified depending upon which language we choose to adopt.

If we choose Go, we do not have to change the eBPF program written in restricted C as Go bindings for BCC are available in the gobpf package. This package also provides low-level routines to load eBPF programs from .elf files, so we can send compiled programs to the AGW and remove clang as a dependency. However, programs would presumably have to be compiled for various kernel versions. Pre-compiling is not necessary though as gobf allows the front-end Go program to trigger compilation just like the Python program above does.

If we choose C/C++, we should consider switching from BCC to libbpf. While BCC provides C bindings to write front-end programs, libbpf is a simpler alternative. This means the libbpf API is not as convenient, but it supports compiling both the eBPF program, and the front-end program into a small binary and remove clang as a dependency on the AGW.

We have tools to translate Prometheus metrics for consumption at the magmad service in the AGW for both Python and C/C++. Such tools don't exist in Go, but writing those tools will presumably be part of the plan to replace Python on the AGW with Go.

Here, we enumerate alternatives to the above design that we considered:

While the eBPF-based alternatives present above can be used to implement a wide variety of observability tasks from inside the kernel, the non-eBPF ones are not extendable.

There are several concerns that this proposal attempts to address:

Performance is a major concern for this proposal as we are putting code into the kernel's network path on the access gateway. We benchmarked the eBPF code above using the Spirent lab setup. Four tests were run in total, each with 600 user devices, 5 MB download rate per device, and an attach rate of 10. The tests ran for 30 minutes each. The tcp_sendmsg instrumentation was enabled for two tests and disabled for the other two. No distinguishable downgrade in throughput was observed when tcp_sendmsg instrumentation was enabled. The mean download throughput for each of the four cases hovered around 530 Mbps.

A minor performance concern relates to compiling the kernel instrumentation code from C to BPF bytecode and loading it onto the kernel. We have benchmarked the prototype program above on magma AGW VM and across 50 runs, it takes an average of 1.75 sec for BCC to read the program from a separate source file, compile it and load it into the kernel. Since this will only happen when the kernsnoopd service starts, it is not cause for concern.

This design will require BCC tools and Linux kernel headers to be installed on the access gateway. Kernel headers are already installed. BCC is delivered through apt packages bpfcc-tools, libbpfcc, and python3-bpfcc. Combined, these packages have a download size of 15.5 MB and take up 63 MB of disk space after installation (see Open Issues).

kernsnoopd will provide debug logs of collected counters for observability. Appropriate nosetests will be included in the implementation to support validation and debugging. Additionally, kernsnoopd will also provide the GetMetrics gRPC methods to expose the Prometheus metrics.

From the GetMetrics method of kernsnoopd, metrics enter magmad and follow the general metrics pipeline which is mature and well-tested.

The compiled instrumentation code from this proposal will be loaded into the kernel, but there should not be security concerns because eBPF statically verifies programs before loading and provides security guarantees. Unchecked memory access is not allowed, neither are unbounded loops [6]. The total number of instructions allowed is also limited [7].

The in-kernel program will be able to observe coarse network statistics for processes running on the access gateway. Individual packets will not be captured or inspected. Command line arguments of running processes will be read, but they will not be stored anywhere.

We have arrived at the above design after a few rounds of discussion and feedback from the team. In the original design, we had planned to

We evaluated the performance impact of instrumenting the net_dev_start_xmit kernel event using the Spirent lab setup as we did for tcp_sendmsg. Two tests were run, one with net_dev_start_xmit instrumentation disabled, and one with it enabled. Each test had 600 user devices, 5 MB download rate per device, and an attach rate of 10. The tests ran for 30 minutes each.

We also stress-tested the net_dev_start_xmit instrumentation. The most expensive operation in the relevant callback is incrementing a value in the BPF hash map. We put the increment operation in a loop and iterated it n times. When n = 100, the mean download throughput reduction was modest: from 430 Mbps to 420 Mbps. For n = 150 and n = 175, no noticeable reduction was observed compared to n = 100. However, at n = 200, download throughput collapsed completely and produced a mean of around 5.5 Mbps with the peak hitting 75 Mbps. This sudden drop in throughput may have to do with excessive packet loss because of the slow callback function.