Orc8r manages subscriber configs through its subscriberdb service, syncing the data southbound to AGWs on a regular basis. To perform this efficiently, data digests are taken and compared to intelligently send only the data necessary for syncing with an AGW. This document provides an overview of this digest pattern.

Previously, Orc8r followed a basic data sync pattern that sent all subscriber configs down to all gateways once per configurable interval, regardless of whether the AGW actually needs the data.

This introduces a number of issues at scale, namely significant network pressure. For example, to support 20k subscribers over 500 active gateways, subscriber config sync alone would generate at least 20TB of network pressure per month per network.

The architectural additions implemented for the subscriber digests pattern are highlighted below. 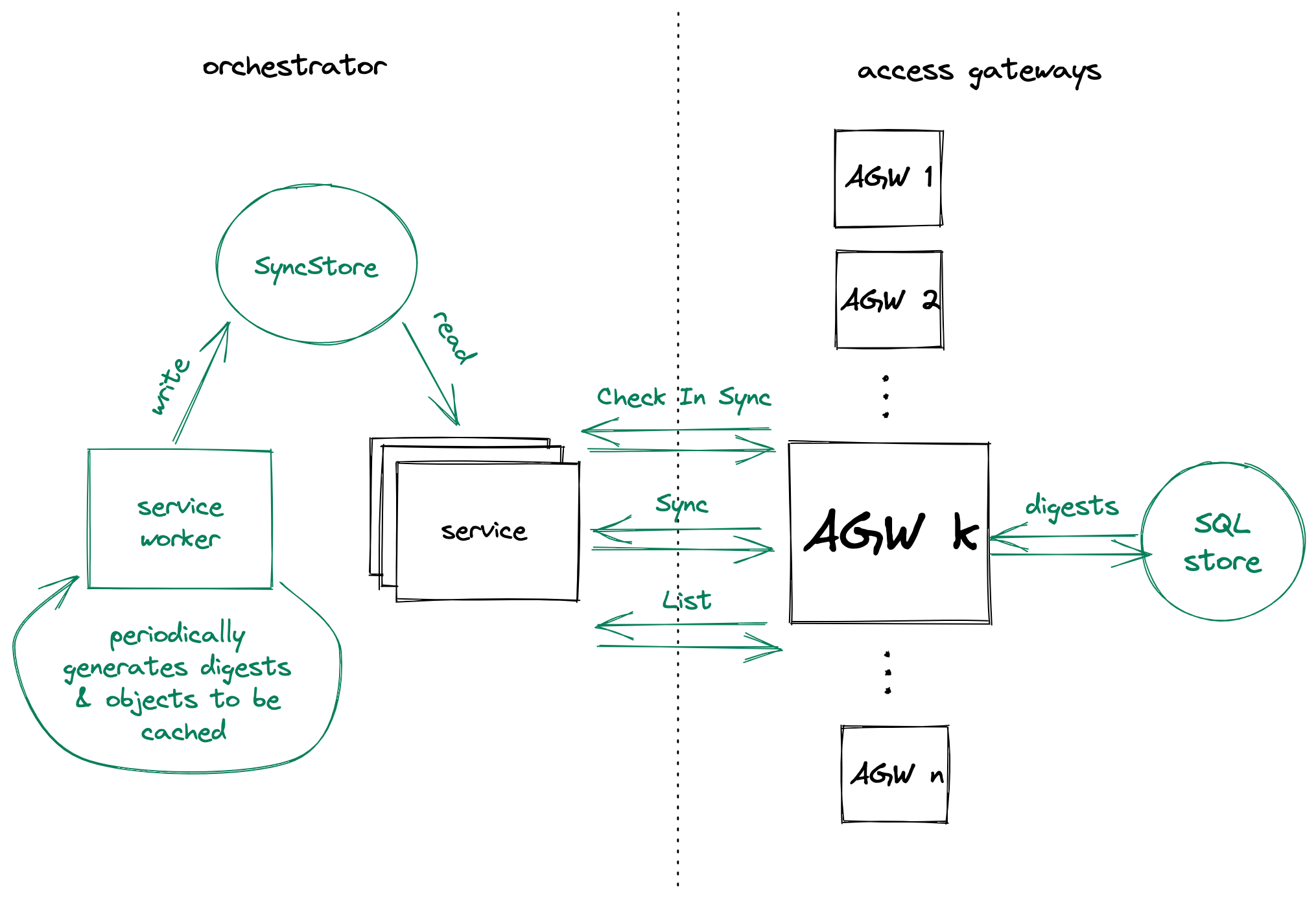 This pattern relies on generating, storing, and communicating digests (aka hashes, or deterministically-encoded, constant-length "snapshots") of the data to be synced.

NOTE: currently, a decoupling process between subscriber config objects and their gateway-specific APN resource configurations is conducted to ensure the generated digests are representative and also network-general. See additional notes for more details.

subscriberdb_cache is a single-pod service in charge of managing network digests. The service constantly generates new digests at a configurable interval for each network.

The generated digests are written to a cloud SQL store to which subscriberdb has read-only access. In this way, subscriberdb can directly read the most up-to-date digests from the SQL store, preserving the limited resources of the subscriberdb_cache singleton.

subscriberdb_cache supports loading subscriber configs either directly by IDs or by pages. To that end, it generates its own page tokens using the same mechanism as in configurator.

Aside from its subscriber database, a gateway also manages SQL stores for its local root and leaf digests.

Currently, gateway-specific "APN resource" configurations are also stored in the subscriber config objects synced to AGWs. This is a legacy pattern that will be redressed in an upcoming refactor.

For added reliability, and to remediate (trivially improbable) hash collisions, an Orc8r-directed resync is enforced on the AGWs at a configurable interval (e.g. once per day).

To this end, subscriberdb tracks the last resync times of each gateway, and enforces the resync for gateways which haven't undergone a resync in a while.